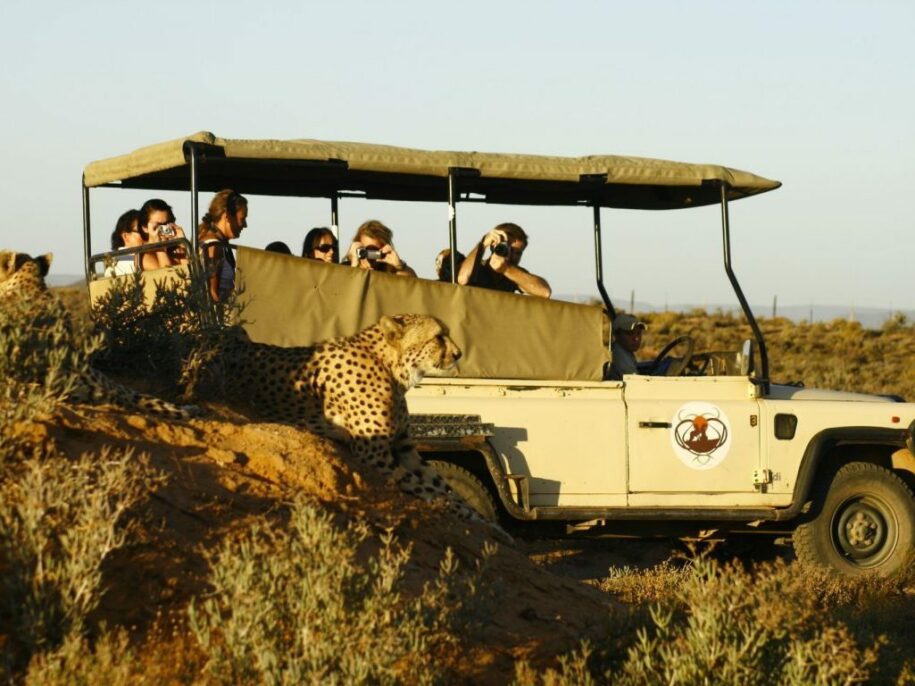 Take your trip to Cape Town to the next level with a visit to the Inverdoorn Private Game Reserve. Only two and half hour’s drive from the Mother City, Inverdoorn is one of Cape Town’s closest private game reserves! With Shark and Safari, you can experience all that this fantastic reserve has to offer on a one-day Safari tour.

The Inverdoorn Game Reserve covers an area of 10 000 hectares, at the entrance to the southern Karoo, and is famously home to each and every member of the Big Five: elephant, lion, leopard, buffalo, and rhino.

In terms of wildlife, giraffe, hippo, Burchell’s Zebra, springbok, black wildebeest, and ostrich can also be spotted within the reserve. Keep an eye out for all of this wildlife on the 2 to 3-hour game drive included in the Shark and Safari day safari. In addition, the tour includes a refreshing welcome drink upon arrival at the game reserve, and a tasty buffet lunch after the game drive.

The drive and the tour, in general, are led by experienced safari guides, who will amaze and entertain you with exciting inside stories about your surroundings.

Inverdoorn Private Game Reserve has gone to great efforts and expense to source and re-introduce wildlife into the Cape region, with an undeniable emphasis placed on wildlife conservation. Inverdoorn was the first to release free-roaming white rhino, zebra, and kudu back into the Karoo in the nearly one hundred and fifty years since they had come close to being wiped out through hunting and agriculture.

The Cheetah is one of the great animals that Inverdoorn has rescued and returned to the region. With less than 10 000 cheetahs left in the world today, conservation initiatives such as Western Cape Cheetah Conservation (WCCC), pioneered their way forward for cheetah survival.
The Shark & Safari day tour includes a visit to the Cape Cheetah program, where guests can learn more about their initiatives and achievements.

We encourage you to wear comfortable shoes during the hour, and to pack sunscreen and a hat, to avoid sunburn. Don’t forget your camera or binoculars either, so as not to miss a moment of this incredible experience!